The UK Holocaust Memorial Day 2021 ceremony (to remember the millions of people killed in the Holocaust and affected by other atrocities around the world) will be streamed online at 7pm on Wednesday, 27 January. To receive the link to join the UK ceremony, please register here  (the ceremony will run from 7–8pm).

Over the years the county of Gloucestershire has become well known for welcoming  people who have had to flee from the countries in which they were living due to war and oppression and forge a new life for themselves.

Dr Shirley Holton is an eminent physician, now in her late 80’s. She lives in High Wycombe but has practised medicine in the NHS all over the UK, including for a short while in Reading and Gloucester. She gave this interview exclusively to GCC:

Please note, the content in this interview could be upsetting to some readers.

It was the reunion in the Catskills and my cousin Mendy that sparked off the idea of going back to the place where so many of my family were murdered. Mendy was a genealogy addict and ‘discovered' me through various family networks. So here we were - me and my husband Robert amongst a crowd of Americans - all descendants of one man - our great - and in some cases great great - grandfather Joshua, aka Ayshl Mankunski from Simnas Lithuania. We and Mendy got on very well. He even came to visit us in London. It was then that the plot was hatched for us - he, his son Joshua - named for our anticedent - and us to visit the ancestral hamlet. So we did - with our guide the wonderful Brigitta.

The tales we heard were horrific. Those of our family who had not migrated to England or the States were rounded up, made to dig their own graves and shot. A crowd of girls half naked - the Nazis saved outer clothes, they could come in useful - were crowded into a clearing to be shot. A kindly priest, trying to save them, baptised every one of them on the spot, but chief Nazi said this was not a religious matter - it was genetic - they were Jews and they were shot.

We met a 95 year old Lithuanian who had received a medal as righteous amongst the nations from yad vashem. He and his brother had saved 2 Jews, hiding them in different nights amongst the forests. Years later, I met a descendant on my grandmother’s side of the family. His mother could ‘pass’ as non-Jewish. She ran across Europe ahead of the Nazis. Later, she ran guns for Hagganah buying guns for the fledgling state of Israel. I became a Doctor and have spent my life healing people, helping people. We must never, ever, ever let what happened be forgotten. For the sake of all the children who never grew up, never even reached double figures, everyone was someone’s mother, father, brother, sister, aunt, uncle, friend , grandparent.

The word Genocide is too small to adequately convey the horror, the evil which was done. 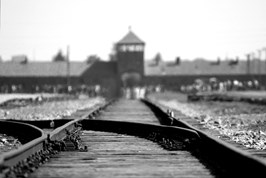