Built in 1875 Lydbrook Rail Bridge (known locally as Stowfield Viaduct or the Black Bridge) is a former railway structure which spans the River Wye. The rail line was closed in 1964 and the bridge deck was refurbished to form a walkway. It is an important connection across the River Wye between Gloucestershire and Herefordshire, and is used by over 20,000 walkers every year as part of the 136 mile Wye Valley Walk.

It was closed in 2016 following an inspection which confirmed sections of the bridge were in very poor condition and unsafe. The report also recommended that extensive repairs were needed before it could be reopened.

The two councils jointly commissioned a feasibility report, which detailed the proposed options for ensuring the bridge remains safe and securing the necessary funding to restore it.

Gloucestershire County Council, Herefordshire Council and the Wye Valley AONB are committed to working together following this disappointing news, and in order to try to get the river crossing restored as soon as possible a scaffold walkaway crossing will be installed as part of the current works.

Once the scaffold crossing is completed and the pedestrian access is restored, the councils will be looking at the best long term options for the bridge and working with their partners to secure funding to help do this. 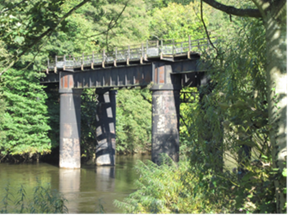