Gloucestershire Archives will be open until 4.30pm on Friday 23rd December, and will reopen at 9.00am on Tuesday 3rd January.

Gloucestershire Family History Centre will be open until 4.00pm on Friday 16th December and will reopen at 10.00am on Tuesday 3rd January.

Don't miss "Anything that moves...",  a free, transport themed event at the Heritage Hub on Saturday 3 December, 1- 4pm.

Includes a special guest appearance by Thomas the tank engine!

This exhibition tells the story of ten young refugees who came to Gloucester in 1939.

The material first appeared in an exhibition mounted to mark Holocaust Memorial Week in 2005.

In the nine months before the outbreak of the Second World War in September 1939, thousands of Jewish children were brought to Britain from Germany under the 'Kindertransport' [Children's Transport] scheme.

On arrival at Harwich, they were housed in a former holiday camp before being dispersed around the country.

This is the story of ten refugee boys who came to Gloucester and were cared for by the Gloucester Association for Aiding Refugees [the Association] in a hostel at 18 Alexandra Road. 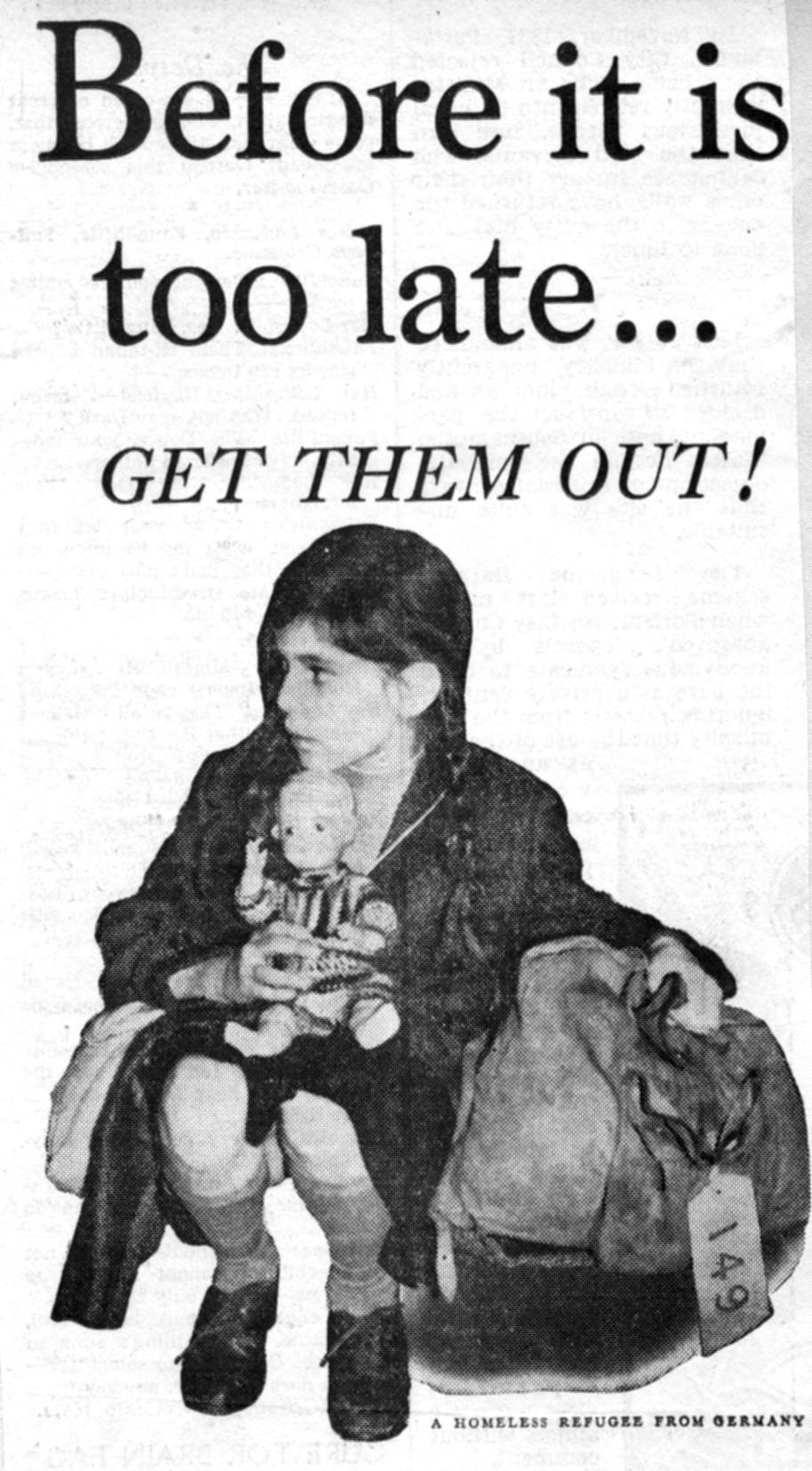 Most of the Kindertransport children were placed in foster homes, but the boys who came to Gloucester were considered too old to be fostered.

The Gloucester Association raised £800 to buy 18 Alexandra Road as a hostel for the boys.

REFUGEE BOYS FOR THE GLOUCESTER HOSTEL 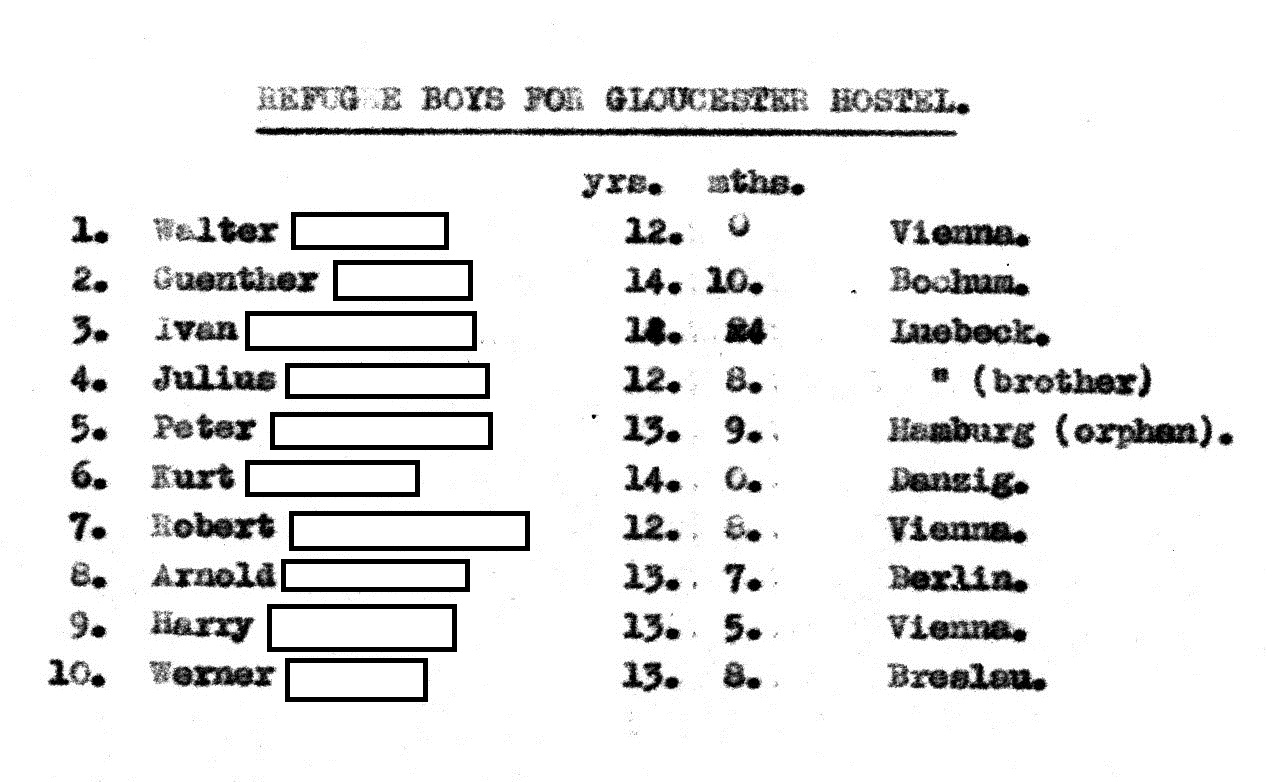 To look after the boys the Association employed Dr & Mrs Arnstein, a German-speaking Jewish couple from Prague, at a salary of £100 a year.

Dr Arnstein, a lawyer, had already been in trouble with the Nazi authorities in Prague. The offer of this job allowed the Arnsteins to leave Czechoslovakia and enter Britain.

In the middle of June 1939, the boys arrived in Gloucester and settled into 18 Alexandra Road. Eight of them can be seen here with the Arnsteins. 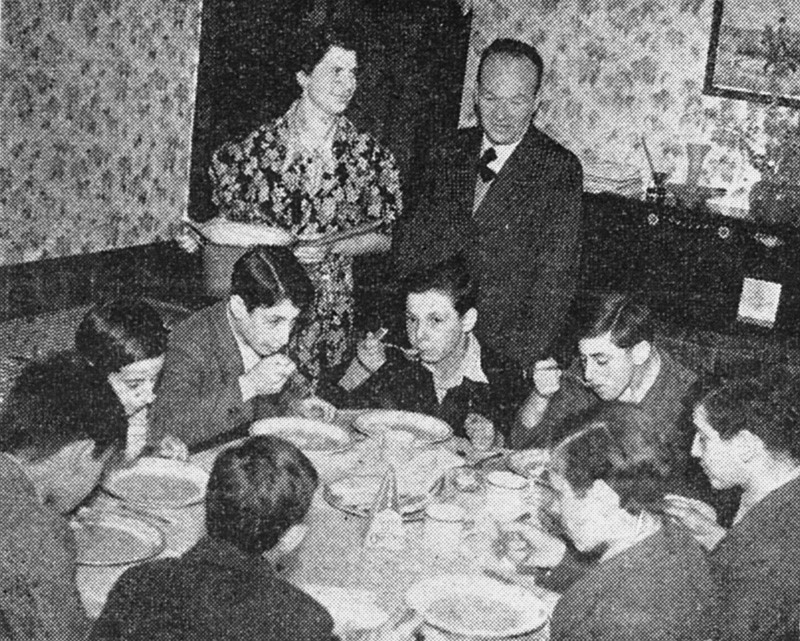 The Kinderstransport boys spoke little or no English. To start with, they were sent to Archdeacon Street Boys' School until they were old enough to leave school and start work.

This photograph shows the school building as it is today. 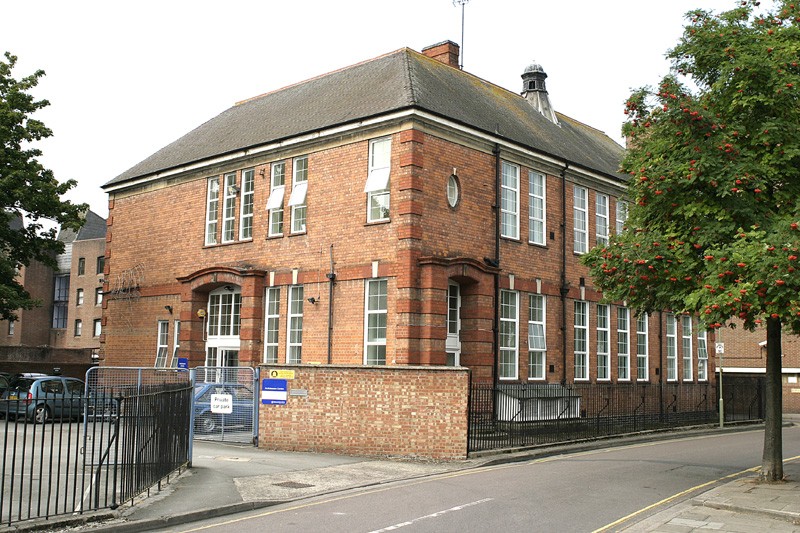 By Christmas 1939, the Second World War had started. A Gloucester department store organised a party for the boys at which they were given presents. 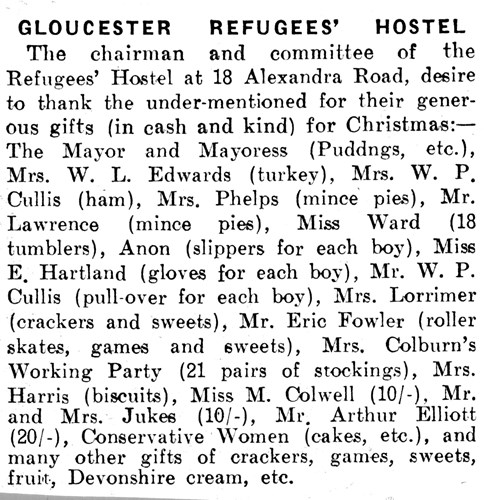 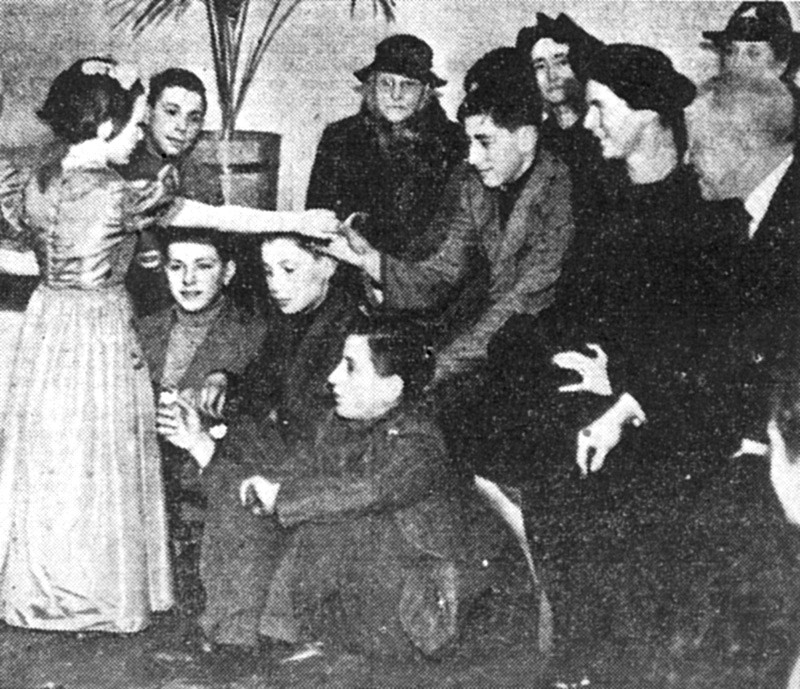 Günther Meyer was the first boy to leave school and start a job, in October 1939.

By the time this report was written, in the autumn of 1940, seven of the boys had jobs and by August 1941 all ten had left school and were in work. They were expected to contribute towards their keep.

Description of the type of the work of the boys in the hostel 18, Alexandra Road, Gloucester.

Guenther Meyer started work on the 28th of Ootober 1939 with Messrs Wm. T. Nicholls Ltd, builders, St. Paul Road Gloucester. He worked in the saw mill for about 6 months and was then transferred to the shop, St. Paul Road, to learn the carpentry, and before Christmas 1940 to the firms yards in Hempstead, Gloucester, to help building army huts. He was then put again into the saw mill, where he is still working. His apprentice forms have not been signed yet. His wages are 17 shillings 6d. a week. His contribution to the hostel is 9 shillings  a week.

Ivan Mularsky started to work on the 23rd of March 1940, at St. Aldate Garage, Northgate Street Gloucester. He is learning there everything in the line of automechanic for example stripping down cars or lorries .The Garage is now under the control of the Ministry of Supply. His wages are 1 Pound a week, his contribution to the hostel 12 shillings 6d weekly.

Peter Nebenzahl started work on the 29th July 1940 with W. Judd, printer and stationer, 19 St Johns Lane, as compositor. His work is chiefly composing and doing small goods like visiting cards and a few errands. His wages are 11 shillings 6d a week, his contribution 7 shillings  a week.

Werner Zorek started work on the 29th July 1940 at W. J. Nicholls Ltd. Builders and Decorators, St Paul Road Gloucester. He worked in the saw mill and will continue so until he reaches the age of 16. Them he will start to work as a cabinetmaker and commence his apprenticeship. His wages are 16 shillings 6d a week, his contribution 9 shillings  a week.

Harry Vorgang started to work on the 22nd of December 1940 at Mr Andersens Garage in Longford, Gloucester to an automechanic  trade, became ill and left the garage in March 1941. He started again to work on the 23rd of June in Blinkhorns Wireless department Eastgate Street, Gloucester. He is helping repairing and in the delivery of wireless sets. He is sometimes helping in selling wireless sets and other electrical goods, his wages are 12 shillings 6d, his contribution to the hostel.

Arnold Ullman started work on the 19th January 1941 at the carpenter of the Dean and Chapter of the Cathedral in Gloucester. He is repairing stones and does woodwork. His wages are 5 shillings a week, his contribution 0.

Curt Reiman started to work in January 1941 in the taylors workshop of the firm ‘Golden Anchor' Southgate Street Gloucester. He is making all sorts of works, which beginners can do as buttonholes, sleaves and vests. His wages are 8 shillings, his contribution 3 shillings. 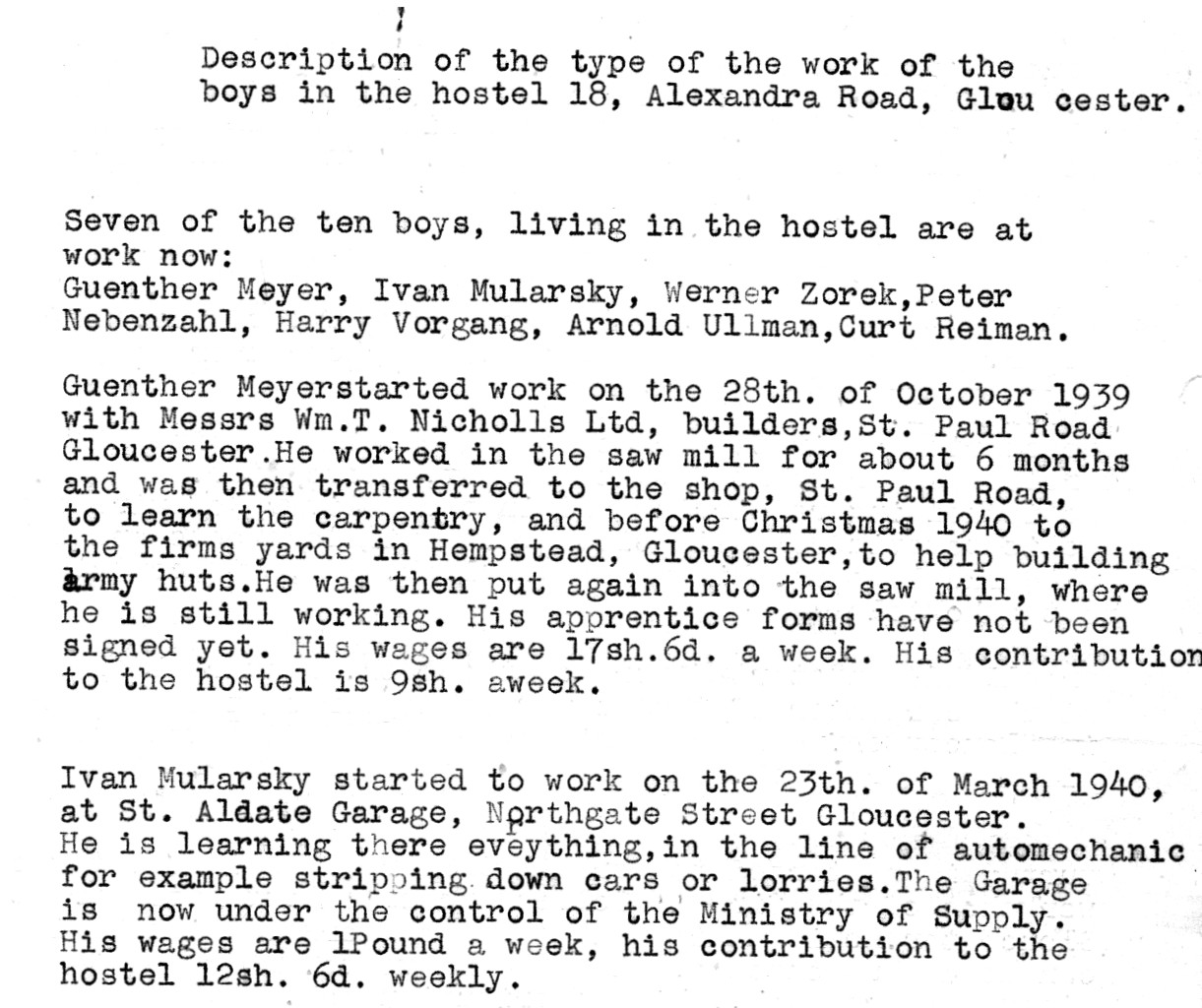 In November 1941, the Arnsteins resigned as Wardens and it was decided to close the Alexandrea Road hotel. The boys were found lodging for which the Association paid 22 shillings and 6 pence per week each, as well as continuing to provide other support.

Kurt Reimann, who was working in the tailors' workshop of the Golden Anchor Clothing Company in Southgate Street, went to live with Mr Davis, his supervisor at work. Mr Davis had already supported Kurt at a Tribunal to decide if he should be interned as an enemy alien.

I am writing, for my committee, to thank you and Mrs. Davies for so kindly offering to have Kurt Reimann to live with you. It is good of you to offer him a home, and we are pleased to let him come to you.

We propose to pay 22/6 a week, for board, lodging and laundry, for each of our boys, and we hope this will suit you. We shall still be responsible for their clothes and other expenses, and for their general welfare.

We hope you will feel you can consult us at any time you wish, and we shall always be glad to be of any help we can.

With thanks to you for all your kindness to Kurt since he had been at the Golden Anchor, and especially for going with him to the Tribunal at Bristol. 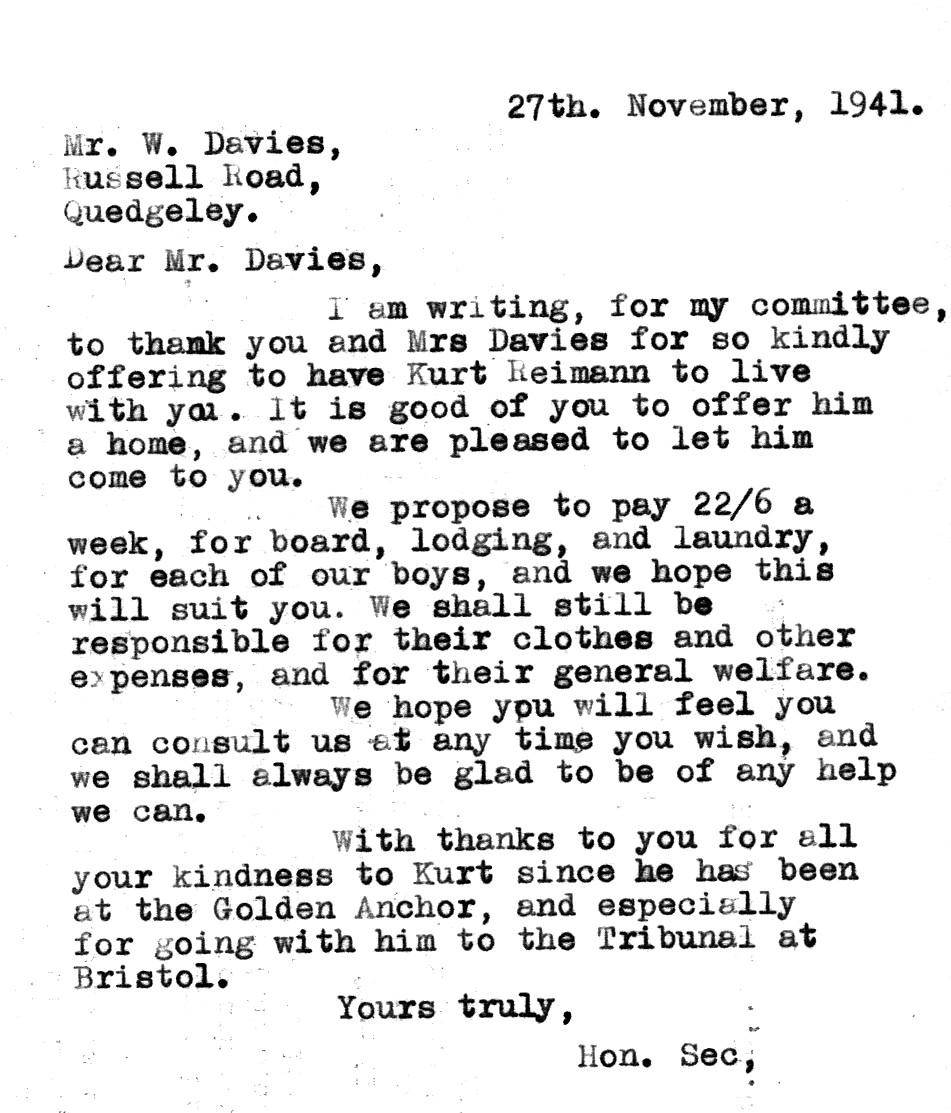 The Gloucester Association for Aiding Refugees continued to support the boys until they became independent at around the age of 18.

Kurt Reimann joined the British Army, as did Peter Nebenzahl and Arnold Ullman. Harry Vorgang moved to Manchester and Walter Kolpak went to America where he had relatives. 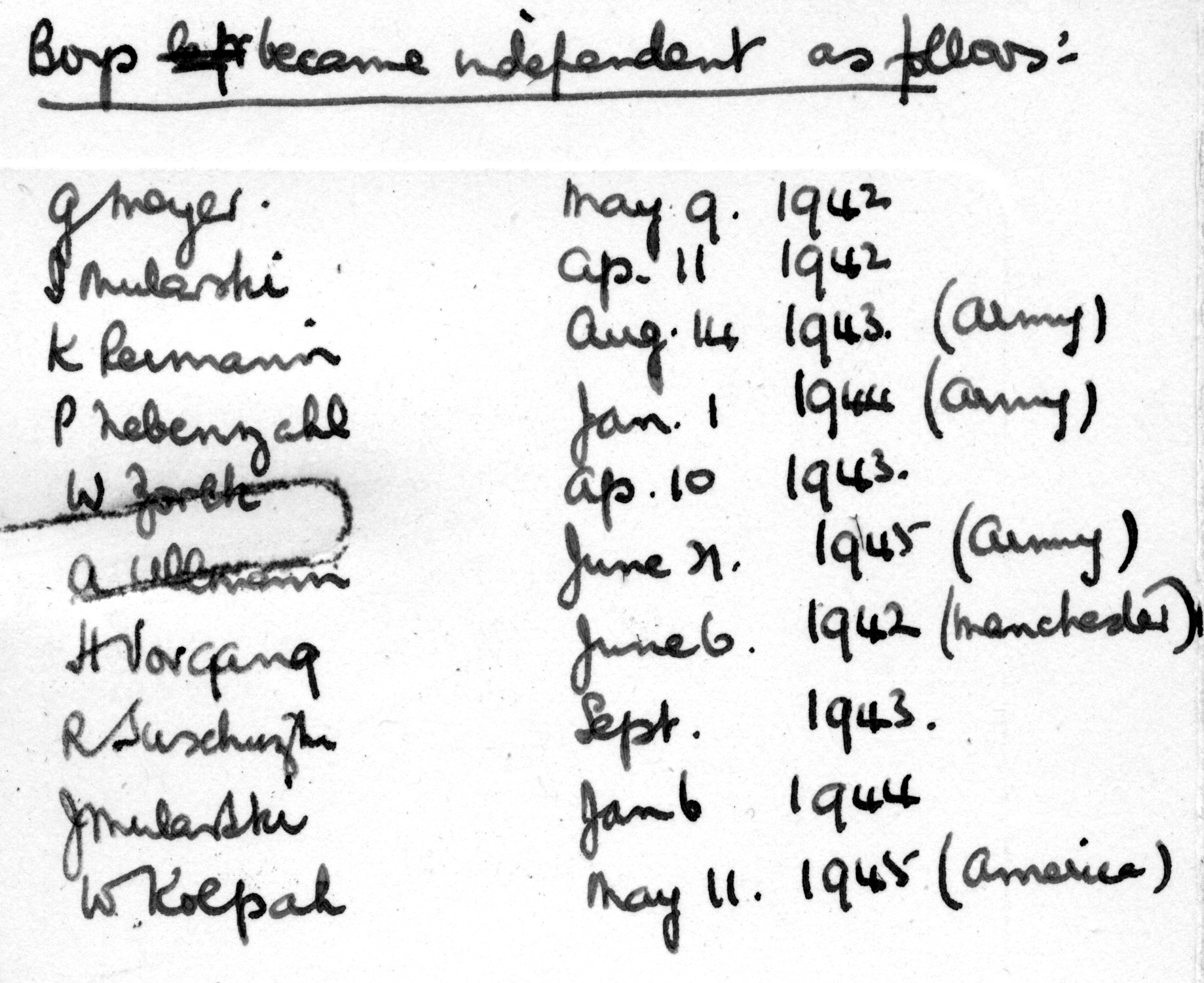 The story of the Kindertransport boys who came to Gloucester has been put together from the documents in the archive of the Gloucester Association for Aiding Refugees which is kept safely at Gloucestershire Record Office.

We know virtually nothing about what happened to the boys (or the Arnsteins) after the War, except that Walter Kolpak went to America. If anyone can add to the story, please contact us: 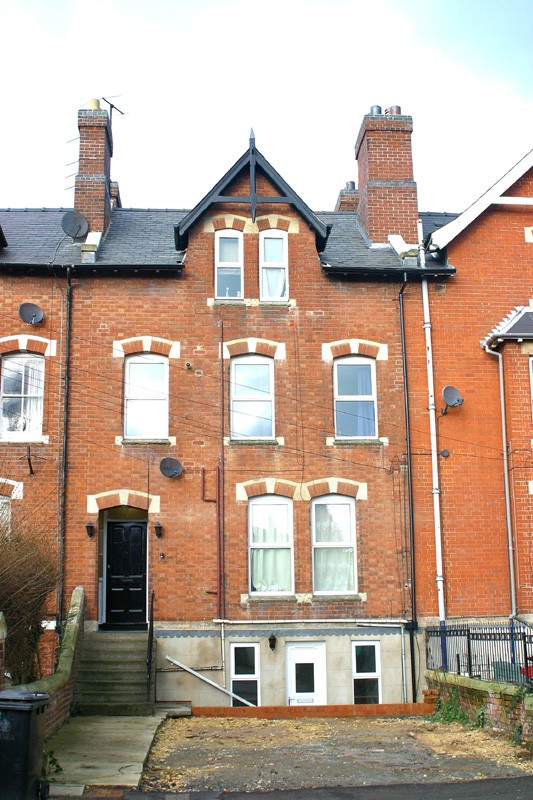 About 10,000 children were rescued under the Kindertransport scheme. Of those boys who later volunteered to serve with the Allied forces, many did so under 'English-style' names. More details about Kindertransport can be found on these web-sites:

And within our own collections:

The material on this web-site first appeared in an exhibition mounted by Gloucestershire Record Office Education & Outreach Service to mark Holocaust Memorial Week. The archive of the Gloucestershire Association for Aiding Refugees [reference number D7501] may be seen at Gloucestershire Archives, Alvin Street, Gloucester GL1 3DW. To search our catalogue, click the link below: