I hope you are enjoying using our revised, easier to navigate, website.  If you find any links that are broken or have any other issues with it, please make us aware of them by emailing archives@gloucestershire.gov.uk.  Thank you.

Archives can be used in many ways.  They can tell us about the past; provide key information needed in our daily lives; enrich our understanding of place, community and identity.  To explore this further, take a look at 'Why Archives' our series of mini films which feature some of our researchers, volunteers and staff.

You can also dip into our project case studies.  A good example is 'Never Better', an innovative project which was underpinned by the Gloucester asylum records in our collections. Read more about it here:

Never Better was an exciting and ambitious one year project in 2019, led by Gloucestershire Archives in partnership with Gloucester History Festival and two Gloucester based arts organisations, Strike A Light and GUST. It was funded by the National Lottery Heritage Fund and the Wellcome Trust and built on a smaller scale externally funded pilot project in 2018. The project’s objectives centred on: raising awareness of mental health issues and treatments past and present; raising awareness of Gloucestershire’s pioneering role in the field of mental health; encouraging new communities, including people with mental ill health, to engage with and discover their past; encouraging high quality cultural activity in the city. The project culminated in an innovative piece of immersive theatre, performed at the 2019 Gloucester History festival as part of the City Voices strand.  An edited version of the performance then went on tour to four external venues across Gloucestershire.

During the course of a year, the Never Better project team worked with transcribers, directors, producers, actors, musicians, architects, a community gatherer and a community choir to develop a creative response to historic and contemporary narratives. The historic dimension was informed by unusually rich mental health collections held at Gloucestershire Archives.  Patient case notes from Victorian and Edwardian asylums were transcribed by 12 trained project volunteers, recruited and supervised by the Community Heritage Development Manager Sally Middleton, who represented Gloucestershire Archives on the project team. The transcripts were sent to a professional writer/director as raw material for a drama based on the unheard voices of former asylum inmates. To set alongside these historic accounts, a paid community gatherer recorded interviews with 12 Gloucestershire people who had lived experience of mental health issues.  These are permanently preserved in Gloucestershire Archives.

The final piece also included site-specific installations and specially commissioned music.  These various elements combined powerfully to tell the story of mental health in Gloucestershire over the last 150 years.

Never Better was a resounding success.  The performances were extremely well received, attended by over 200 people, with help from around 60 volunteers.  The piece had a powerful impact on many who saw it and raised £500 in audience donations for local mental health charities.  The trailer on Youtube gives a flavour of elements of the performance and captures the reactions of some of those involved and audience members.

Participants and audience members told us:

'The experience was very special. It was lovely to be part of such a meaningful and worthwhile production' 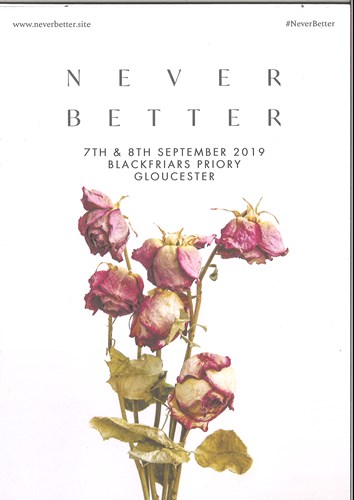 We compile statistics for key aspects of our service such as how many people we are reaching, onsite, off -site and online, and how many documents we have described in our online catalogue. You can see the 2021/2 statistics here.