This pages focusses on Black British history, sharing with you some of the fantastic contributions that Black Britons have made locally and nationally.

BHM is held to highlight and celebrate the achievements and contributions of the black community in the UK. Throughout history, black people have made huge contributions to society in the fields of art, music, science, literature, medicine, transport and many more areas.

Making your mark as a DJ in the UK is a task that many have tried and failed at. None of that applies to Young Lion though, who made his well known mark on the UK Dancehall scene, not only as a DJ but also as a pioneer of the movement. He brought Dancehall to the forefront of the music industry in full force.

From mixing and blending exclusive riddims for 3 hours straight on his Dancehall mix show on BBC Radio 1xtra for over 8 years; making his listeners buss a whine at crazy hours of the morning, to linking up with some of the most influential Dancehall acts the world has seen. From Beenie Man, Vybz Kartel, Mavado, Shaggy... to name just a few! 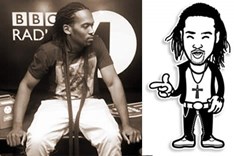 Young Lion is not just a Dancehall DJ. Originally from Bristol, he is globe trotting too. He has been booked to play around the world in Jamaica, Italy, Gambia, Switzerland (the list goes on….). Not just as a Dancehall DJ but a well established, well known and well respected urban music DJ with the ability to mix and blend any genre of music getting any crowd on a serious Young Lion vibe!

Introduced to the music scene at the tender age of 9 by his radio presenter Dad "RasB", who used to give him the last 10mins of his show to play a few tunes. By age 13 he was given the opportunity to shine with his own radio show and Young Lion was born!

Being completely in love with the music scene from such a young age, it was only right for Young Lion to join a sound system right? So he did!

Regarded by many as being one of the UK's best Dancehall and Urban music DJs, he won awards that say this too. 'The Big Eye' and 'Air Jamaica' South West No.1 Radio DJ, to having a weekly show on the UK's leading black music station BBC 1Xtra, as well as  being booked to play consistently around the UK.

Imagine all of that and having a serious job on the side! All of that on top of trying to stay relevant is not something many would be willing to do. But having a love and passion for music is also something not many have.

As regards the serious job previously mentioned; if you live in the South West of England and find a cat stuck up a tree, just call the fire brigade and you never know, Young Lion might just turn up!