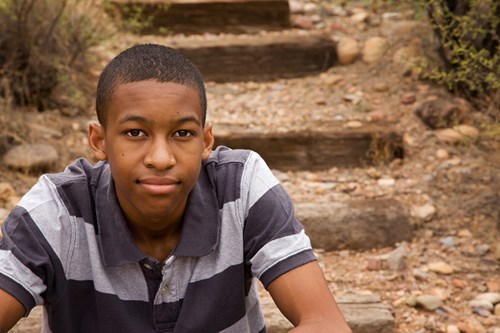 When his mother received a message that uncles in the Taliban were coming to take her son away to a fighters’ training camp at the age of 14, she sent him away to seek asylum in Europe. He became one of the young asylum seekers to come into the care of Gloucestershire County Council’s fostering service. He travelled for two exhausting years to reach Gloucestershire and carries a photo he took of the police unloading his traveling companions from the back of a truck. The background of this boy is typical of many young asylum seekers from Afghanistan and the Horn of Africa. He is now 19 years old and is at college studying. A very bright, intelligent, friendly young man, he cares for and helps others who are arriving in similar circumstances.

Children in many countries are expected to become child soldiers, taught to kill or be killed for either the government or rebel militia. Children arrive in the UK after seeing destruction, brutality, death and even the murder and rape of their own families. On their journeys they are taken advantage of by unscrupulous smugglers and traffickers, enduring thirst and heat, freezing cold, starvation, the deprivations of mass refugee camps and the dangers of crossing in or under trucks and in overcrowded boats. In Libya they have been used as slave labour to pay their passage across the Mediterranean and bear sores from shackles on their ankles and wrists, scars, cuts, burns and bruises from torture and beatings from their home country and on their journey. These children need immediate protection and a place of safety. Unfortunately there is a significant threat from people even in this country who will take advantage of these children using them as unpaid, slave labour.

After a phone call a social worker or police officer brings a child to my home from countries such as Afghanistan, Eritrea, Ethiopia, Chad, Iraq and Vietnam. All different, all with their own very distressing story. I am on an emergency list and my role is to give them a safe and peaceful few days until a long-term foster home can be found while their asylum claim is considered. Several times I have noticed physical wounds and have taken the child to a local GP surgery and, in one instance, taken the child to have dental treatment for a broken tooth. One GP admitted to me she was shaken by the torture marks on the back and feet of a boy from Sudan.

I am not on my own. Apart from the support of the fostering social workers and ongoing mandatory training, there are various support groups of other foster carers and for the young people.  I register the child with GARAS who supply initial teaching of English and guidance through the asylum legal system. I do need to mention my girlfriend who is totally supportive and caring!

In 2014 I was challenged by the television pictures of young people, many the same ages as my eldest grandsons, behind a high wire fence calling out, “We are people not animals”.  With a group from this area who had similarly been challenged we made eight journeys to France, taking clothes and food into the refugee camps, volunteering with Dunkirk Children’s Centre and preparing food as volunteers in the refugee community kitchen.  I then realised that as a single man I had a spare bedroom and I could offer a home to those children who had no families and so I applied to become a foster carer.

I don’t just restrict my home to young asylum seekers. As an emergency foster carer, I can be called on any time of the day or night (often late at night) to give a first, safe, caring home to a child who is an asylum seeker or has come from a local situation where there are equally distressing circumstances. During the two years, in addition to the 13 young asylum seekers, 20 local children have been placed at my home after a crisis in their homes.